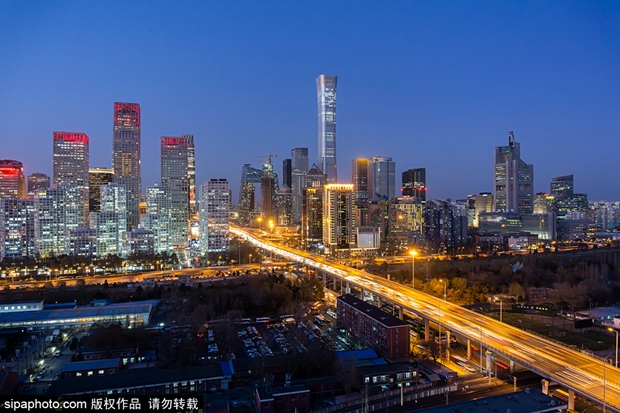 A photo shows a night view of the CBD area in downtown Beijing, capital of China. [Photo/Sipa]

Global multinational companies in the Fortune Global 500 rankings remain upbeat on China and are setting up new projects and increasing investment in existing facilities despite the hazy global economic outlook due to COVID-19 epidemic headwinds and rising trade friction, experts said.

During the first seven months of this year, 17,703 new foreign-invested companies were set up in China, up 12 percent on a yearly basis, according to data provided by the Ministry of Commerce.

On Thursday, agreements for 10 projects involving a total investment of $797 million from European companies were inked at an online video conference held in Jinan, capital of Shandong province.

The renewed confidence of overseas enterprises stems largely from the helping hand extended by Chinese authorities in matters like investment, production and business operations and has been enhanced by the country's efforts in ensuring orderly work resumption since the pandemic. This has played an important role in sustaining global supply chains, said the experts.

Despite the pandemic effect and trade tensions between China and the United States, nearly 92 percent of the European companies said in a recent survey that they are keen on setting up bases in Shandong and have no plans to exit the province, said Jens Eskelund, vice-president of the European Union Chamber of Commerce in China.

"Since we entered China in the 1980s, we have been witnessing the fast development of China which has developed into one of the most important markets for us," said Sanjiv Lamba, CEO for the Asia-Pacific region at Linde Plc, a leading industrial gas manufacturer.

In Shandong alone, Linde has set up facilities in four cities. The company plans to add another $1.3 billion worth of investment in sectors like high-end chemicals and hydrogen energy.

"Shandong has formulated and introduced 20 innovative foreign investment optimization measures, which seek to transform the province into a first-class business and investment destination with a high degree of internationalization, convenience and innovation,"Delmarcelle said.

"Despite the COVID-19 effect, Shandong's economy has showed strong resilience," he said.

Since the outbreak of the epidemic, 1,156 foreign-invested enterprises have set up shop in Shandong during the first half of this year, up 6.5 percent on a yearly basis, according to data provided by Deloitte.